What to see in the Botanic Gardens 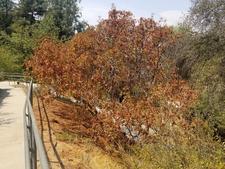 In the past several weeks this California native took on a dramatic look as the trees quickly shut down with higher temperatures and reduced moisture to exhibit crowns of desiccated leaves. This adaptation reduces transpiration (water that evaporates through aerial parts including leaves, stems, and flowers) and need for water. The leaves remain on the tree longer than on other deciduous trees, which gives the appearance that the trees have suddenly died. This growth habit also creates a beautiful display of reddish-brown leaves that really stand out in the green landscape. There are several specimens growing throughout the Gardens, including two particularly large trees in the bed between the switchbacks leading to the Rose Gardens. 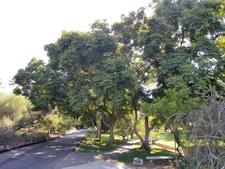 The second species to see now is native to southwest China and is sometimes referred to as the Chinese flame tree. We have two large golden rain trees, one on each side of the trail that leads to Alder Canyon. These trees have a decurrent growth and have spread out to cast wide shade. In the upcoming weeks, a profusion of tiny yellow flowers set on panicles will envelop the crowns. 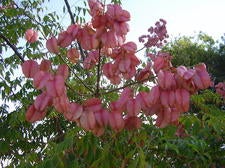 Following this display, the tree will be adorned with pink papery seed capsules, which is an equally impressive sight. As a last show of splendor, all the leaves will turn yellow before dropping to the ground in this winter deciduous species. This tree is truly wonderful to see but you will have to come more than once to see the colorful progression as we transition into cooler weather.

Share This
More News
Let us help you with your search